You are here:
General Pumps 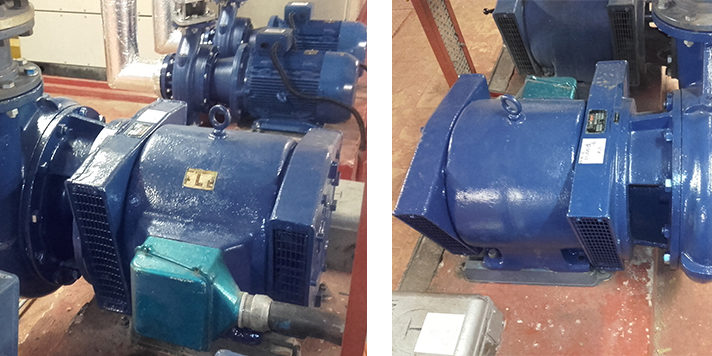 Pumps UK were called out by our customer as they had a pump installed on their site that had failed. The pump itself was an old circulator which had next to no details on it that we could work with.

Our engineers carried out various electrical and mechanical tests on site and discovered that the pump had seized up due to bearing failure which ultimately caused the windings to burn out. Due the pumps age we decide the best solution would be to remove it for a complete rewind and overhaul.

The pump had a 30kW motor which, if you don’t know, is extremely heavy and it was installed in the lower level basement plant room. We knew that transporting it to the ground level was going to be tricky.

We had a team of three engineers attending and we started by removing the suction pipework to allow for more room to use an engine hoist. We managed to hoist the motor and pump complete to the floor, onto the skid and transported it to ground level.

Once we had the pump in our workshop facilities we fully dismantled it to perform a full assessment. We found that both sets of bearings had failed, collapsed and the windings had shorted out between phases. Also, the internals of the motor had a large amount of carbon dust and bearing debris caused by the collapsed bearings and burnt insulation.

We started by fully stripping all the old copper coils and insulation from the slots. We then cleaned all the stator and laminations and painted the internals with anti-tracking varnish. After this, we made the templates for the new coils, wound all the new groupings up and installed the coils into the stator. Once it was all re-wound, we braised the new supply leads and winding connections, dipped the stator in the varnish solution and stoved it for eight hours until cured.

After the it had been cured, we installed new bearings on the rotor, installed the rotor back into the stator and fully rebuilt the motor.

Where the pump had limited information, we had to measure the shaft and seal housing so we could select a new mechanical seal. We selected the most suited seal and rebuilt the pump along with a new casing gasket.

We carried out a test run on the pump and motor along with a hydrostatic pressure test before transporting back to site and refitting back in position. This pump should now last another thirty years.

Everything was completed within a couple of weeks.