You are here:
Submersible Pumps 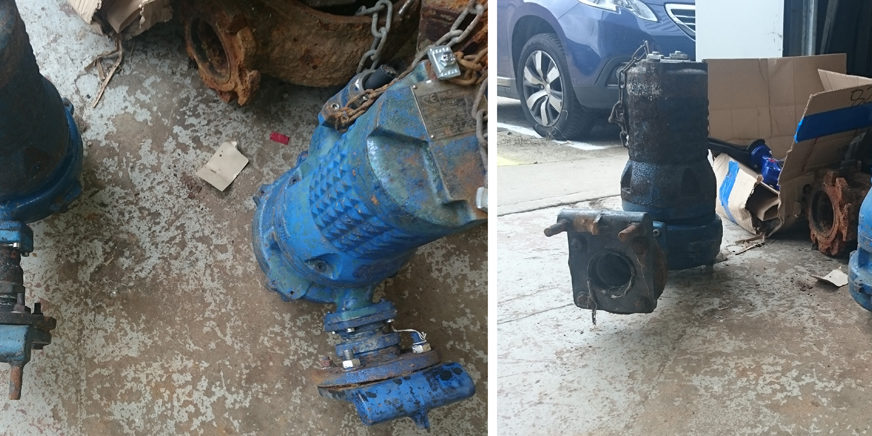 The Pumps UK service division were approached by a local retirement village to assist in an ongoing pumping issue they had. The site had a very large sewage chamber with two old Calpeda sump pumps installed.

We were informed that the pumps were constantly burning out after a relatively short time. After further investigation by our engineers and talking with the client about the history of the installation, we found that the original contractor had miscalculated what was needed to remove the waste from the chamber to the main sewer. So to overcome their problem they installed macerating pumps so they could produce a higher head to reach the distance that they needed to pump. Due to this, the pumps were constantly blocking up and burning out. To make matters worse, the duct foot was modified in such a way that you could not lift the pumps out the pit and re seat them without the chamber being empty. This meant they would not relocate on the guide rail and made servicing particularly difficult.

Due to the error on the initial design of the unit, we had no option but to start again. We were unable to reuse any of the existing installation.

We selected two Lowara 1300 series with a non-clog impeller as a replacement. The Lowara 1300 series pumps are capable of reaching 15meters head and over a kilometre in distance, which is more than enough to reach the main sewer. We also installed all new non return valves and pipework connecting to the existing discharge pipe. Due to the size of the new pump, we installed them on a base and we included quick release coupling to enable easy removal.

We also upgraded the existing panel and control floats. We installed a bespoke duel pump panel which had the capabilities of a high-level alarm and trip for both pumps.

We attended the site over a period of 2 days with very little interference to services.