Replacing a Cold Water Booster Set for a Residential Flat

You are here:
Booster Pumps 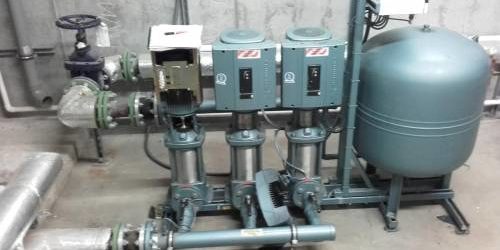 Pumps UK was called to a block of residential flats in Woolwich which had Grundfos inverter-driven cold water booster sets. Two of the three pumps had failed electronically where both inverters had blown out. On top of that, the seals were leaking and the bearings had failed. So this left the entire block of flats running on just a single booster pump.

This is the old Grundfos booster set:

We started off by removing the old booster pump and all of the old pipework and then both supplied and installed a new three pump PUK VARI COM inverter-driven booster set. For this, we had to commission, test and install crimped fittings. We managed to get all of this done within a day to ensure little to no disruption was caused to the customer.